First registered on 13th September 1966 by David Hiam Ltd of Sutton Coldfield (but likely built much earlier) chassis H-BJ8/100 is one of the pre-production and development Phase II cars created by the Abingdon factory. This stunning provenance was excitingly identified by the British Motor Heritage Trust in 2018. Typical MkIII chassis numbers followed a sequence from H-BJ8/25315 – 43026 with Healey typically giving prototype models unique differing numbers.

The Phase II Austin Healey (chassis no 26705 onwards) debuted some major changes to the Austin Healey 3000 platform with these cars going on to be the most desirable Healey model available today. The changes included a new revamped chassis to improve ground clearance with added radius arms to improve handling. Luxuries such as locking door handles were added plus new safety features in the form of a new front and rear sidelight setup.  It is these Phase II cars which now represent the most valuable and desirable mass production Healeys today.

KNX 332D’s original supplier, David Hiam, was a BMC competitions department works driver circa 1960-62 and founded ‘David Hiam Ltd’ of Minworth, Sutton Coldfield. Hiam procured many notable Healeys including the Austrian-Alpine BMC competitions department Austin Healey 3000 MKIII BJ8 ARX 91B – another early Phase II model chassis 26754. It is likely Hiam purchased the car either from Donald Healey Motor Co or the production line as he did many other special cars. Today, the car remains on its original Warwickshire registration of KNX 332D, additionally verified by its original green logbook. The car remains in its original specification and paint/ trim combinations of British Racing Green with Black interior trim.

This example has only had three owners from new. Prior to the third custodian who purchased in 2018 KNX 332D had not changed hands since 1969.  The car is supplied with excellent paperwork including original log book, owners handbook, purchase documents plus fantastic service and maintenance history to verify its original mileage of 70,000 miles.

KNX 332D has been maintained by us for the last twenty years, has been treasured and as such kept very original. The car features all original body panels which in 2001-2 we undertook a light renovation of, repainting the car from bare metal, re-upholstering the original seats in upgraded leather (with chrome seat piping as per MkIII cars) and fully rebuilding the engine to standard specification but now running on unleaded fuel. 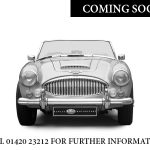