Originally built on 22-23rd October 1964 for North American export this BJ8 was carefully restored between 2007 and the end of 2011 as a period-style ‘Nasty Boy’ conversion. The works were professional and comprehensive with the car taken back to a bare metal chassis with new floors and many new panels. At the same time side vents and an aluminum bonnet with louvers and works grille were fitted as per the original Works cars.  Most notably, this car is a rare and desirable very early BJ8 Phase 2 (sometimes reffered to as a Phase 1.5)  which featured all the ground clearance, suspension and cooling benefits of the Phase II over the Phase I but retained the slimmer rear lights and the single sidelights over the bulkier, later car units – this was a rare transistion phase of production which lasted 11 months only.

The bodywork remains in excellent condition today with no signs of wear with the paint of excellent quality both from the exterior and underneath. The interior is very good and well presented throughout with carefully integrated additional gauges to measure engine vitals.

The Nasty Boy style of this car is not an unfamiliar concept in the Healey community; especially in America where in 1960 Ford’s engine plant superintendent dropped the same newly developed V8 engine into his Austin Healey 3000, the principle being that US owners and mechanics were not only more familiar with this compact V8 from a tuning perspective but preferred it for its considerably reduced weight and increased power which was extremely potent in such a small chassis

This style was prevalent on all Healeys 100/4-3000 and these such cars eventually became referred to as ‘Nasty Boy’ Healeys. This car represents an excellent and unique opportunity to the Healey enthusiast seeking upgraded performance. The car is fitted with a Ford 289 Ci V8 built 16/08/1966 and rebuilt during restoration to fast road specification engine with cylinder heads and cams with Weiand aluminum rocker cover.

This particular conversion is very well executed with the engine located pleasingly low down and far back in the car. The engine was rebuilt by Mike Huddart in the Uk and converted to unleaded. We are advised that power output is 300BHP.. The car has an Edelbrock performance manifold, Holley 4 Barrel carburetor converted to center hung floats. Transmission is a manual, 5 speed Borg Warner T5 gearbox. The cooling system has been upgraded to support the engine power. Uprated suspension and brakes support the added performance. 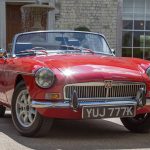 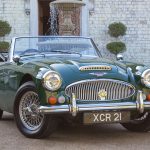