Restored in 1999 by JME Healeys with a bare metal repaint, engine bay repaint and structural work to a high standard with photographic and paper documentation to support this. The shut lines on this Healey remain straight and the car remains original and true to form.

In December 2016 the owner commissioned us to perform a full engine rebuild with the engine stripped down, chemically cleaned, crack and pressure tested with a few modernisations for reliability and better performance. The engine remains perfect today with less than 4,000 miles since, delivering extremely strong performance and displaying excellent vitals on the gauges which all function well. The gearbox and overdrive were refurbished by well reputed Healey transmission specialists Hardy Engineering in 2012 (with 12,000 miles since) and the suspension was refreshed in 2015 (4,000 miles since). 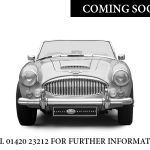