First registered 28th February 1958, this late Abingdon built 100/6 is a matching numbers example with just two owners from new. Now finished in Old English White with Lobelia Blue duo-tone, this example was fully restored from the ground up between 2013 and 2016 with very low mileage since completion. The car has had just one previous owner from new with the previous owner (prior to restoration from 1958 to 2015).

During restoration, the car was acid dipped to removed all contaminants and electrophoretic coated, the panels repaired utilizing all the original body panels with just repair sections used. Much of the original chrome and stainless was renewed with the rest replaced.

Mechanically the car is very well specified with the engine re-bored to 3000 specification at 2997cc with new pistons, a fast road camshaft, lightened flywheel and much more, an alternator and high torque starter was additionally fitted. A modern 5-speed gearbox has been fitted (the original is available) and the rear differential upgraded to a 3.91 ration versus 4.3. The suspension similar was uprated with improved shock absorbers and anti-roll bars. All these upgrades contribute to an especially well driving example with excellent upgrades for modern usage.

Inside the seats have been replaced with items to match the original Black leather with White piping and with new carpet. Some of the original interior panels, including dashboard were in good condition and retained.

The car is supplied with photographic documentation of restoration and comprehensive parts and works bills to accompany this. 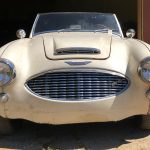 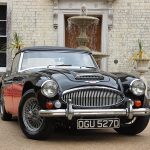