Just in, additional photos to follow. Call 01420 23212 for more or email Sales@RawlesMotorsport.com

‘The car was returned to Donald Healey in the early 1970s, where it received the full works treatment. This included the full set of aluminium body panels currently fitted to the 3000, including all four wings, doors as well as a dished boot lid, fitted to all the factory Works Healeys. Under the bonnet is a considerably fettled engine, featuring big valves, triple DCOE carburettors, performance camshaft and a lightened and balanced flywheel. Powered through a straight cut close ratio gearbox, as well as a limited slip differential’

For sale as a project restored by Rawles Motorsport. 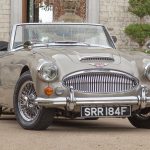